Join North Braddock Residents for Our Future for their monthly meeting. This month they will screen sections of the documentary series "Braddock, PA" by Rosie Haber and have special guests and subjects of the documentary on hand to discuss the documentary and environmental racism and justice in our community.  Guests include Isaac Bunn, Robert Grey, and Tony Buba. Time permitting, there will also be an expedited regular order of business.


6:30-7:30 in the Rotary Room of the Braddock Carnegie Library (419 Library Street, Braddock, PA 15104) which is adjacent to the Children's Library on the second floor. If climbing stairs prevents you from attending please DM us so that we can make accommodations.  This meeting is free and open to the public. North Braddock Residents for Our Future is a grassroots group of residents organized to promote community health and clean air, and fight unconventional gas drilling in our community. We consist of members from North Braddock, Braddock, Braddock Hills, East Pittsburgh, North Versailles, Pittsburgh, Wilkinsburg and all adjacent areas.
No comments:

Presented by the League of Women Voters of Pennsylvania’s “Straight Scoop on Shale” initiative and hosted by the University of Pittsburgh, Graduate School of Public Health. As in previous years, this year’s conference will feature important new research on shale and public health impacts. The event is free but there is a $14 charge for lunch.
9 a.m. - 5 p.m. at the University Club in Oakland (123 University Place, 15260).  Please register online here.

Norfolk Southern: Dirty, Dangerous and in your Backyard: 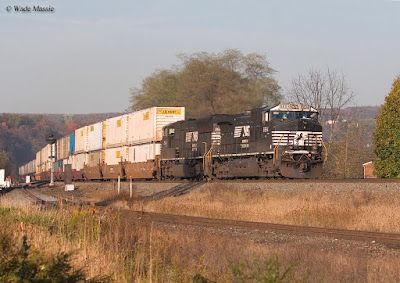 Learn what your community can do to fight proposed "monster trains" from polluting the east end of Allegheny County.
Norfolk Southern Railroad is accelerating plans to raise bridges in our communities in order to
run longer double-stacked trains along a 20-mile route through 24 communities which would
impact the health of over 112,000 residents. The proposed changes are projected to increase
pollution in these communities the equivalent of 6,800 buses per day.  Norfolk Southern has tried
to push this through without any input from the affected communities.

Come to this educational meeting with the Breathe Project to learn more about what residents
of the east end of Pittsburgh can do to fight to protect their health and their communities.
Presenters will include Matthew Mehalik, Executive Director of the Breathe Project and Glenn Olcerst, Artist, Attorney, and Central North Side Resident. 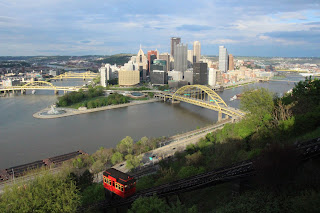 Enjoy breathing?  Our health depends on clean air.  The 82nd Sustainability Salon will be our annual fall focus on Air Quality.

Sue Seppi, Project Manager (and former Executive Director) of the Group Against Smog & Pollution (GASP, on whose board I serve) will bring an update on the organization's legal, education, and advocacy work -- including the ongoing lawsuit calling the county to task for spending air quality funding on building renovations, and efforts to bring the region into compliance with hydrogen sulfide standards.  Shaena Berlin Ulissi will talk about source attribution analyses:  how to quantify air quality and health impacts of air pollution sources.  And Conservation Luminary Linda Wigington will be here to share progress and results from the ROCIS initiaitve (Reducing Outdoor Contaminants in Indoor Spaces).  Over 200 people from Southwestern Pennsylvania have monitored the air quality inside and outside their homes and workplaces, as part of the ROCIS Low Cost Monitoring Project and contributing to an investigation of interventions that can reduce exposure to particles.

Salons run 3-10 p.m. at Maren's house in Squirrel Hill.  Please don't arrive before 3 p.m.  We generally start the program not long after 4pm, after folks have had a chance to meet, mingle, and tour around an interesting and productive urban permaculture site.  Please email me (at maren dot cooke at gmail dot com) with salon in the Subject line to RSVP (yes or maybe), or click on the link in your EventBrite invitation (if you're not already on my list, please email me with salon in the subject line to be added!).
Please RSVP each time -- it helps greatly in several ways.  Among other things, attendance varies widely, and these events have been so successful that we need to begin limiting attendance.  So RSVP early if you can, to ensure your participation!  The free virtual "tickets" on Eventbrite may run out (you don't need to print any tickets, by the way, just be on the list).  Also, weather and such can be unpredictable and it's good to know who to contact if there's a change -- and I'll send directions and a trail map on Friday or Saturday.  Be sure to include salon in the Subject line, as I receive a ridiculous amount of email every day.  And if you're new, please let me know how you heard about the Salons!

Bring food and/or drink to share if you can (see below), along with musical instruments if you play.  Check back on MarensList (where you can find information on all sorts of environmental and social justice events) for updates.  And if you aren't yet on my list, if you're interested in Sustainability Salons (and our occasional house concert, simply contact me and I'll put you on my email list.
As always, I'll be sending out directions and such, and any late-breaking info, to all the RSVP'd folks by the morning of the salon if not before.  So if you don't have it yet, please be patient!  One of these days I'll streamline this process a bit, but for now it takes a while to to dot all my i's and cross all my t's.  (All the extraneous requests for the address don't help;  I have lots of other stuff I send out with it, but don't like to let them go unanswered so it adds hours to my prep time.  If you RSVP properly (see above), you should get the info by the morning of the salon!)

For the uninitiated, a Sustainability Salon is an educational forum, it's a mini-conference, it's a venue for discussion and debate about important environmental issues, it's a house party with an environmental theme.  We usually have featured speakers on various aspects of a particular topic, interspersed with stimulating conversation, lively debate, delectable potluck food and drink, and music-making through the evening.
Past topics have included solar power, youth activism, greening business, greenwashing, the petrochemical buildout in our region, climate/nature/people, fracking, health, & action, globalization, ecological ethics, community inclusion, air quality monitoring, informal gatherings that turn out to have lots of speakers, getting STEM into Congress, keeping Pittsburgh's water public, Shell's planned petrochemical plant, visualizing air quality, the City of Pittsburgh's sustainability initiatives, fossil energy infrastructure, getting money out of politics, community solar power and the Solarize Allegheny program, the Paris climate negotiations (before, during, and after), air quality (again, with news on the autism connection), reuse (of things and substances), neighborhood-scale food systems, other forms of green community revitalization, solar power, climate change, environmental art, environmental education (Part I & Part II), community mapping projects, environmental journalism, grassroots action, Marcellus shale development and community rights, green building, air quality, health care, more solar power, trees and park stewardship, alternative energy and climate policy, regional watershed issues, fantastic film screenings and discussions (often led by filmmakers) over the winter with films on Food Systems, Climate Adaptation and Mitigation, Plastic Paradise, Rachel Carson and the Power Of One Voice, Triple Divide on fracking, You've Been Trumped and A Dangerous Game, A Fierce Green Fire, Sustainability Pioneers, films on consumption, Living Downstream, Bidder 70, YERT, Gas Rush Stories, and food, food, food, food, food, food, food, food, food, food, food, food, food, and more food (a recurrent theme;  with California running out of water, we'd better gear up to produce a lot more of our own!).
Quite a few people have asked me what sorts of food to bring -- and my answer, as always, is whatever inspires you;  I believe in the "luck" part of potlucks.  Tasty noshings for the afternoon, hearty main dishes or scrumptious salads and sides for dinner, baked goods from biscuits and breads to brownies or baklava -- and/or beverages:  wine, hard or sweet cider (the latter we can mull if you like), juice, tea, whatever.  The more the merrier!  Local fare is always particularly welcome, whether homemade or boughten.  Dishes containing meat or dairy are fine, though if it isn't really obvious please make a note of it.  We refill a bunch of growlers at East End and provide a big batch of mostly-homegrown pesto (cheesy and vegan), and other things as needed.  More details will come after you RSVP (hint, hint!).

And if you like to make music or listen to homemade music, don't forget the evening sing -- we typically run the gamut from Irish fiddle tunes to protest songs to the Beatles, and a fun time is had by all.  Bring instruments if you play, and/or pick up one of ours.  Conversations will continue through the evening, as well.
No comments: