salon |səˈlän; saˈlô n |:  (historical) a regular social gathering of eminent people (esp. writers and artists) at the house of a woman prominent in high society;  a meeting of intellectuals or other eminent people at the invitation of a celebrity or socialite.

Regular, that's the plan (subject to Mother Nature, of course!).  Eminent and intellectual people, to be sure -- that's yinz.  House, check.  Woman, c'est moi.  High society, celebrity, socialite?  Not so much.  Salons occurred in 17th-century France, purportedly powering the Enlightenment, and were more recently repopularized by the Utne Reader.  I've long contemplated hosting an ongoing series of conversational salons in this tradition: informal gatherings around the notion of sustainability.  Some will have a featured guest to lead a discussion on a particular topic, others will be open to whatever comes up.

Since we just installed the newest solar photovoltaic system in Pittsburgh
(featured on a recent solar tour), we'll start the series with an event devoted to discussion of solar power -- you'll have an opportunity to see our system (nestled among the roof garden) and we'll welcome Ian Smith, the local rep for Standard Solar, who can fill us in on how it all works and answer questions.  So far (in the depths of winter), our grid-tied system has produced 171 kWh, enough electricity to offset 261 lbs of carbon dioxide -- the carbon-sink equivalent of three trees.  When summer rolls around, we will likely exceed our household usage by a wide margin. 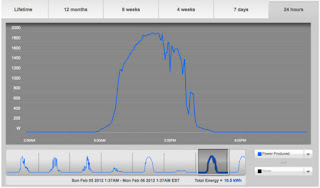 In conjunction with kicking off the conversation on a solar theme, we are resurrecting our Second Saturday Sings:  a monthly potluck and folksing that has been on a too-long hiatus during a lengthy period of transition to our not-so-new house.  So on Saturday February 19th, we're throwing our house in Frick Park open to friends old and new for an afternoon of conversation followed by dinner and music.  I even have one or two solar-power songs up my sleeve for the segué!  We'll start at 2 p.m., and wind down around 9 or so.  Bring food or drink to share if you can, along with musical instruments if you play (and we have a bunch here -- in particular, please let me know if you play guitar, whether or not you'll be bringing one).  RSVPs are much appreciated (both to get a handle on attendance, and just in case we get a blizzard or someone comes down with something terribly contagious);  please email me (my name in this format:  first.last@gmail.com ) and I'll send you directions if you need 'em.