How do the media -- print, broadcast, and online -- affect public perception of environmental issues?  The 22nd Putting Down Roots Sustainability Salon & Sing will focus on environmental journalism, with a terrific group of speakers:
• Don Hopey, lead environmental reporter for the Pittsburgh Post-Gazette and president of the Society of Environmental Journalists, and David Templeton, coauthor of the groundbreaking Mapping Mortality series.
• Kathy Knauer, executive producer of The Allegheny Front, Pittsburgh's own environmental radio show on Essential Public Radio, along with reporter Reid Frazier, fresh back from a foray down to Louisiana to learn about the implications of a Shell facility planned for Beaver County
• Sharon Walsh, editor of the regional online news outlet, Public Source
• Bill O'Driscoll, who covers a host of environmental issues for the Pittsburgh City Paper
• Kirsi Jansa, an environmental journalist from Finland known locally and beyond for Gas Rush Stories, which we featured in our February Salon.
Timothy Puko, the writer responsible for much of the Tribune-Review's great environmental coverage, was hoping to join us as well but will be out of town.

The next Sustainability Salon, on December 14th, will be about several Community Mapping projects. January 11th we'll have the first of our wintertime film screenings, along with the usual potluck and sing, winter weather permitting! 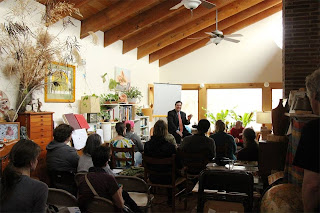 3-10 p.m. at Maren's house in Squirrel Hill.  Please don't arrive before 3pm;  we usually introduce speakers beginning around 4pm after folks have had a chance to meet, mingle, and tour around an interesting and productive urban permaculture site.   Please be sure to RSVP (important for yesses and maybes, please do so each time -- it helps greatly in several ways.  Among other things, attendance varies widely, and it helps to have a handle on numbers in advance (we may need to begin limiting attendance);  also, weather and such can be unpredictable and it's good to know who to contact if there's a change -- and I'll send directions and/or a trail map if you need 'em on Friday or Saturday.  If you email, be sure to include salon in the Subject line, as I receive a ridiculous amount of email every day.  You can also RSVP on Facebook or EventBrite.
Bring food and/or drink to share if you can, along with musical instruments if you play.  Check back on MarensList (where you can find information on all sorts of environmental and social justice events), for updates.  If you'd like to start making your own kombucha, please bring a pint jar along.  And if you aren't yet on my list, if you're interested in Sustainability Salons (and our occasional house concert, simply contact me and I'll put you on my email list.

Note that I'll be sending out directions and such, and any late-breaking info, to all the RSVP'd folks by the morning of the salon if not before.  One of these days I'll streamline this process a bit (assistance would be welcome -- thanks to Beth for all her help so far with the transition to EventBrite), but for now it takes a while to to dot all my i's and cross all my t's.
----------------------------
For the uninitiated, a Sustainability Salon is an educational forum, a venue for discussion and debate about important environmental issues, a house party with an environmental theme.  We usually have featured speakers on a particular topic, interspersed with stimulating conversation, lively debate, delectable potluck food and drink, and music-making through the evening.
Past topics have included grassroots action, community solar power, Marcellus shale development and community rights, green building, air quality, health care, solar power, trees & park stewardship, alternative energy & climate policy, regional watershed issues, fantastic film screenings & discussions (led by the filmmakers) over the winter with both YERT and Gas Rush Stories, and food, food, and more food.

Quite a few people have asked me what sorts of food to bring -- and my answer, as always, is whatever inspires you;  I believe in the "luck" part of potlucks.  Tasty noshings for the afternoon, hearty main dishes or scrumptious salads and sides for dinner, baked goods from biscuits and breads to brownies or baklava -- and/or beverages of any kind:  wine, beer, hard or sweet cider (the latter we can mull if you like), juice, tea, whatever (I've got the kombucha covered, though it's always fun to compare).  The more the merrier!  Local fare is always particularly welcome, whether homegrown or boughten.  Dishes containing meat are fine, though if it isn't really obvious please make a note of it.

And if you like to make music or listen to homemade music, don't forget the evening sing -- we typically run the gamut from Irish fiddle tunes to protest songs to the Beatles, and a fun time is had by all.  Bring instruments if you play, and/or pick up one of ours.  Conversations will continue through the evening, as well.