The Art of Environmental Health: Bridging the Gap Between Art, Science, and Community Action 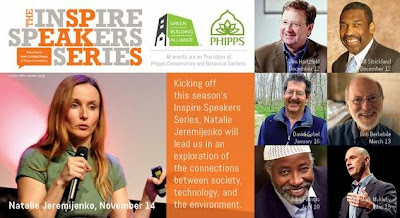 Kicking off this season’s Inspire Speakers Series is an artist and engineer whose innovative and moving approach to creating healthy communities offers a perfect introduction of all that is to come in the sophomore year of this lecture series.  Natalie Jeremijenko will take audiences on an Adventure in Wonderland, where she’ll talk about socio-ecological systems designs, the sport of wrestling rhinoceros beetles, and other strategies to measurably improve our shared environmental health and increase urban biodiversity.

Bobby Vagt, president and CEO of The Heinz Endowments, will discuss the foundation’s work with The Breathe Project, a coalition of residents, businesses, and governments in Southwestern Pennsylvania that are working together to clean up the region’s air quality for the health of its families and economy. He will also share ways that audience members can become involved in this issue.

5:30 – 8 p.m. at Phipps Conservatory & Botanical Gardens, One Schenley Park, Pittsburgh, PA 15213.  Registration is $45, or $25 GBA and Partner Organization Members (Partner organizations for this event include: Phipps Conservatory and Botanical Gardens, Tri-State Area School Study Council, The Breathe Project, AIA Pittsburgh, and Sustainable Pittsburgh, or $20 Emerging Professionals, or $15 Students.  You can register online.  *Networking begins at 5:30 and will include coffee and cookies, followed by presentations at 6:00 p.m. Phipps Cafe will be open until 6:00, with the option to purchase to-go food and drinks to bring into the event space. Register here to join the speakers for dinner after their talks.

Check out the rest of the Inspire Speakers Series presenters here! GBA Members save $51 by purchasing the entire series!

About Natalie Jeremijenko:
Named one of the most influential women in technology in 2011 (by Fast Company), Natalie Jeremijenko is an associate professor in New York University’s Visual Arts department and also directs the school’s Environmental Health Clinic (The xDesign Clinic). The clinic’s model is similar to other universities’, except that students and community members make appointments to discuss environmental health concerns and leave with prescriptions for action (instead of pharmaceuticals). Natalie’s unique combination of experience and education has allowed her to view environmental and human health issues through the lens of both an artist and scientist. With degrees in biochemistry, engineering, neuroscience, and history & philosophy of science, she’ll lead audience members through an exploration of the connections between art, science, and community action in creating healthy communities.

More about Natalie:
·         Recently awarded one of 2013 World’s Most Innovative People for her Ecological Innovations by the World Summit on Innovation and Entrepreneurship
·         Named one of the most influential women in technology in 2011 (Fast Company)
·         Included in the 1997 and 2006 Whitney Biennial of American Art
·         Included in the 2006 Cooper Hewitt Smithsonian Design Triennial
·         University of Technology Sydney solo exhibition
·         Previous academia includes Visual Arts faculty at University of California, San Diego; Faculty of Engineering at Yale University; Visiting Professor at Royal College of Art in London; Distinguished Visiting Professor in the Public Understanding of Science at Michigan State University
·         See Natalie’s TED Talk here
·         Learn more about Natalie and her recent exhibitions

About Bobby Vagt, President & CEO, The Heinz Endowments
Bobby Vagt became president & CEO of The Heinz Endowments in 2008 and provides a wide range of expertise to the foundation, including past work in mental health, housing, education, and the environment with special focus on the needs of underserved and underrepresented portions of the population.  Earlier, while he was president of Davidson College from 1997 to 2007, the North Carolina institution became the first liberal arts college in the country to eliminate loans as a part of financial aid to needy students. The change enabled these students to rely primarily on grants, thus removing the barrier to college attendance presented by debt.

During his career, Mr. Vagt has been warden of a North Carolina prison; director of clinical programs in an Alabama mental health center; assistant director of the budget for the state of New York; and executive director of several public benefit corporations in New York, including the Municipal Assistance Corp., which was created to save New York City from bankruptcy in the 1970s. In addition, he has extensive experience in the business world, having been an executive in the oil and gas industry for more than 10 years.  As a volunteer, Mr. Vagt’s efforts have been directed primarily at children and youth. He has served as chairman of the Children’s Defense Fund and as a parish associate responsible for youth programs at churches in New York and Texas. Mr. Vagt earned a Bachelor of Arts in psychology from Davidson College and a Master of Divinity magna cum laude from Duke University.