The 47th Sustainability Salon will kick off our annual Wintertime Film Series with A Fierce Green Fire, the return of Curt & Kyle, and Mark on Paris -- from Paris!  (and during & after the film and discussion, our always-interesting potluck fare).  The next salon will almost certainly be on January 23rd, and will feature a pair of documentaries about Donald Trump and the environmental (and social) impact of golf -- check back here on MarensList for updates.

Planned protests outside the Paris climate summit have been officially banned.  Some are taking place anyway,and others which took a more violent turn have been squelched.  What does this all mean?  At the November salon on Getting Money Out of Politics, we wound up talking about nonviolent resistance and civil disobedience with Curt Ries and Kyle Amsler of 99Rise.  We'll look at that with A Fierce Green Fire, a Sundance Film Festival Selection that is at once historical and current, contemplative and urgent, farsighted and immediate.  Kyle and Curt will be back with us, to help lead the discussion and give an update on the plans for Democracy Spring. 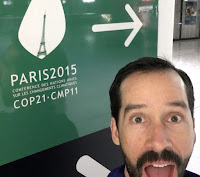 Speaking of Paris, our own Mark Dixon is there right now at
COP21, both as a citizen journalist -- documenting what's going on both inside and outside the summit facilities -- and continuing his efforts to connect Pittsburgh to Paris in the most productive way possible.  He will be with us on Saturday, through the wonders of modern technology, to share his reflections on the summit so far.  We'll start our remote session with Mark by 4 p.m. (remember that he's six hours ahead of us).  You can also read his thoughts on the summit, his analysis of the climate negotiations taking place there, and the facts on the ground, on his blog Mark At COP21.  And -- a late-breaking addition -- Randy Sargent of CMU's CreateLab and Google, who shared the Shenango Channel at our recent air quality salon, is also in Paris (presenting a different project done in collaboration with Google, a 29-year time-lapse of Earth satellite imagery) and will be joining the conversation.

And if there's time (an outside chance), we'll also dip into another documentary, A Force More Powerful on the impact of mass citizen action and nonviolent civil disobedience through history, with vignettes expanded into fascinating and sometimes horrific detail.  And we'll take a look at what historian and activist Howard Zinn had to say about the practice.

Spanning 50 years of grassroots and global activism, A Fierce Green Fire brings to light the vital stories of the environmental movement where people fought -- and succeeded -- against enormous odds.  From halting dams in the Grand Canyon to fighting toxic waste at Love Canal; f rom Greenpeace to Chico Mendes;  from climate change to the promise of transforming our civilization, A Fierce Green Fire is "nothing less than the history of environmentalism itself" (Los Angeles Times).

Why films this time (and in January and February)?  During the winter (when weather can throw a wrench into the best-laid plans), we take a break from our usual speaker forum to host screenings of important environmental films, sometimes with the filmmakers or other folks on hand to lead the discussion.  Please be sure to RSVP if you might come (email Maren with "salon" in the Subject line).  General information and links to past Salon topics are below.  January's Salon will be on the 23rd, and will probably feature a pair of exposés of Donald Trump;  check back on MarensList for updates!

Salons run 3-10 p.m. at Maren's house in Squirrel Hill.  Please don't arrive before 3 p.m.  We usually aim to start the program sometime around 4, after folks have had a chance to meet, mingle, and tour around an interesting and productive urban permaculture site.   Please email me (at maren dot cooke at gmail dot com) with salon in the Subject line to RSVP (yes or maybe), or click on the link in your EventBrite invitation (if you're not already on my list, please email me to be added!).  Please RSVP each time -- it helps greatly in several ways.  Among other things, attendance varies widely, and these events have been so successful that we need to begin limiting attendance.  So RSVP early if you can, to ensure your participation!  The free virtual "tickets" on Eventbrite may run out (you don't need to print any tickets, by the way, just be on the list).  Also, weather and such can be unpredictable and it's good to know who to contact if there's a change -- and I'll send directions and/or a trail map if you need 'em on Friday or Saturday.  Be sure to include salon in the Subject line, as I receive a ridiculous amount of email every day.  And if you're new, please let me know how you heard about the Salons!
Bring food and/or drink to share if you can, along with musical instruments if you play.  Check back on MarensList (where you can find information on all sorts of environmental and social justice events) for updates.  And if you aren't yet on my list, if you're interested in Sustainability Salons (and our occasional house concert, simply contact me and I'll put you on my email list.

As always, I'll be sending out directions and such, and any late-breaking info, to all the RSVP'd folks by the morning of the salon if not before.  So if you don't have it yet, please be patient!  One of these days I'll streamline this process a bit, but for now it takes a while to to dot all my i's and cross all my t's.  (All the extraneous requests for the address don't help;  I have lots of other stuff I send out with it, but don't like to let them go unanswered so it adds hours to my prep time.  If you RSVP properly (see above), you should get the info by the morning of the salon!)

For the uninitiated, a Sustainability Salon is an educational forum;  a venue for discussion and debate about important environmental issues;  it's a house party with an environmental theme.  We usually have featured speakers on various aspects of a topic, interspersed with stimulating conversation, lively debate, delectable potluck food and drink, and music-making through the evening.

Quite a few people have asked me what sorts of food to bring -- and my answer, as always, is whatever inspires you;  I believe in the "luck" part of potlucks.  Tasty noshings for the afternoon, hearty main dishes or scrumptious salads and sides for dinner, baked goods from biscuits and breads to brownies or baklava -- and/or beverages of any kind:  wine, beer, hard or sweet cider (the latter we can mull if you like), juice, tea, whatever (I've got the kombucha covered, though it's always fun to compare).  The more the merrier!  Local fare is always particularly welcome, whether homegrown or boughten.  Dishes containing meat or dairy are fine, though if it isn't really obvious please make a note of it.

And if you like to make music or listen to homemade music, don't forget the evening sing -- we typically run the gamut from Irish fiddle tunes to protest songs to the Beatles, and a fun time is had by all.  Bring instruments if you play, and/or pick up one of ours.  Conversations will continue through the evening, as well.