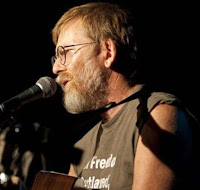 Please join us for this amazing house concert!  Singer, songwriter, guitarist, and lifelong activist Tom Neilson was born on a dairy farm in upstate New York, and has traveled and lived around the world while organizing against wars, pipelines, pollution, and other forms of injustice (and making music).  His memorable songs run the gamut from fracking and pipelines, coal ash and climate change, racism and police violence, labor and land, war and peace...  to Citizens United and Victoria’s Secret, Palestinian cows, and bomb trains, bears, and Betsy DeVos.

Winner of the Kerrville Folk Festival, The Great Labor Arts Award, and the People's Choice Song of the Year (among others), and a nominee for the UN Nelson Mandela Award for Lifetime Achievement in Peace and Justice.  You can learn more, and listen to some of his music online, at TomNeilsonMusic.com.

Tom will be joined this time by his wife Lynn Waldron, who has been co-writing and performing with Tom theatrically and musically for a decade.  She's known for her onstage playfulness, wit, and beautiful harmonies as she weaves the fabric of people’s stories.  She travels with Tom when she can slip away from her work as a software writer and trainer.  At home, she sings in a hospice group called the Eventide Singers, serving those who are critically ill and/or in transition.

One of the savviest songwriters I know.
--World Soul Records

...Reminding people of what is really important, and the power of folk music to say it.
-- Michael Stock, WLRN, Miami, FL


If you haven't heard his slant on social justice and current events you are missing a treat!
-- April Myers, Amarillo UU
Skewers the behavior of the greedy & powerful in the media, corporations & government.
-- People’s Voice Café,  NYC

Tom brought much needed energy and humor to our ongoing peace efforts in Milwaukee this weekend, as well as helping to unite us.  His show was nourishing and replenished the spirits of the community.
-- Mark Foreman, Milwaukee VFP

People are still talking about Tom's performance, which brought just the right balance of biting political commentary, humor, personal storytelling, and memorable music to our house concert.  His songs, his voice, and his guitar wrapped it all up into one great package.                                       -- Vicki Ryder, South Florida Raging Grannies

7 p.m. (door 6:30) at Maren's house in Squirrel Hill.  Light fare to share (food contributions appreciated, but not expected).  Suggested donation $15.  Directions and other info will come after RSVP -- and please do RSVP even if you know your way!  Email me with "concert" in the Subject line, with name(s) of attendees -- or via Eventbrite if you're on the email list for Sustainability Salons (email me with "salon" in the Subject line if you'd like to be added).  You can also call 412-251-5814 (9-9, please, and do leave a message!)

Great work did by you. Informative and problem-solving content that users can easily digest can work for all types of blogs. When a user finds something informative on a blog, he/she is more likely to come back from your side.
Academic Assignment Help