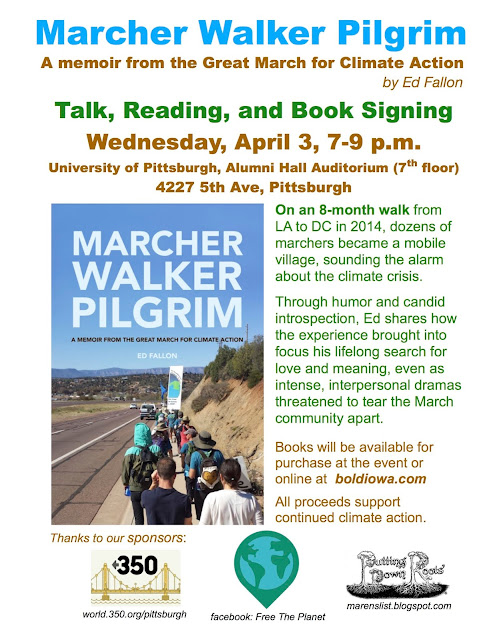 Ed Fallon is an urban farmer, former Iowa legislator, climate activist, and the instigator of the Great March for Climate Action, which came through Pittsburgh on its way from Los Angeles to Washington, DC in 2014.  Now Ed has written a book about the experience, and is crossing the country again to share his insights while communicating the urgency of the climate crisis -- and ways to spur policy action.  More details below;  please RSVP on Facebook!

7-9 p.m. in the Alumni Hall Auditorium at the University of Pittsburgh (4227 Fifth Ave., Pittsburgh 15260).  Free & open to the public.  Books will be available for sale and signing!  Cosponsored by Free the Planet, 350 Pittsburgh, and Putting Down Roots.  For more information, email Maren with "Fallon" in the Subject line.


Ed Fallon, a former member of the Iowa House who founded and directed the Great March for Climate Action, will discuss and sign his book Marcher, Walker, Pilgrim. The book is Fallon’s memoir from the 2014 march from Los Angeles to Washington, DC, when a core of 35 marchers walked 3,100 miles in eight months. The March came through Pittsburgh and western Pennsylvania in mid-October, 2014. Fallon was one of five marchers to walk every step of the way.

In addition to reading from his book, Fallon will take questions and discuss how the story of the March makes clear the absolute urgency of climate change. Fallon will also discuss the current work of Bold Iowa, the non-profit he directs. Bold Iowa’s current focus is an initiative called Climate Bird Dogs — a growing core of 150 people who persistently question presidential candidates about climate change when they visit Iowa.

“My primary motive in writing Marcher, Walker, Pilgrim was to chronicle history’s longest climate march and fire-up people to take action against the existential threat of climate change,” said Fallon. “The urgency I felt during the March is now greater than ever, especially in light of last fall’s UN report and the National Climate Assessment. I hope the story of the March inspires people to mobilize to fight climate change immediately, before it’s too late.”

With humor and candid introspection, Fallon weaves four threads through the narrative:

(1) A changing climate regularly threatens the vulnerable March community,
(2) As the miles unfold, Fallon struggles with his search for love and meaning,
(3) Climate change is already impacting people marchers meet along the way, and
(4) Internal disputes threaten to tear the March apart.

Here are a few excerpts from the book:
“We arrive at our campsite in a park in Gibbon, Nebraska to an almost warlike scene. Large hail stones have broken glass and smashed cars. Siding has been ripped off buildings, paint stripped from houses. In the park, mature trees that normally would provide shade are half naked, their foliage shredded by hail. I try to imagine what would have happened to our tents, vehicles, and bodies had we camped here the previous night when the storm struck.” (from Chapter 25)

“The 19-mile march to Gary, Indiana takes us through East Chicago and Whiting, past the most disturbing industrial carnage most of us have ever witnessed. We pass miles of smoke stacks and flaming towers — garish monuments exposing the lie behind modernity’s sanitized facade. Of all the ugliness we’ve seen on the March, this is the worst.” (from Chapter 34)

“Thirty marchers arrive early afternoon at the junction of Beaver Street and Ohio River Road. A couple dozen local supporters are waiting. Some look concerned. There’s palpable tension and an awareness that something risky and unprecedented is about to happen. Some again try to dissuade us. One even warns that walking on Ohio River Road is almost suicidal. I assure them we’ll be extra careful and that we’re adept at managing heavy traffic.” (from Chapter 37)

Ed Fallon lives in Des Moines, Iowa. His life of public service includes 14 years in the State Legislature and campaigns for Governor and US Congress. Since 2009, he has hosted a weekly talk show, the Fallon Forum. He also directs Bold Iowa, a non-profit organization whose mission is to build rural-urban coalitions to fight climate change. Fallon lives simply in an apartment in Des Moines. With his partner, Kathy Byrnes, he grows much of his own food, raising hens, bees, and thirty varieties of fruits and vegetables. Marcher, Walker, Pilgrim is his first book.