Jul 20: House Concert with Two Of A Kind & Brad Yoder

One giant leap for mankind!  At least for those who enjoy a wonderful house concert.  Join us for another great show in the Putting Down Roots Occasional House Concert Series. 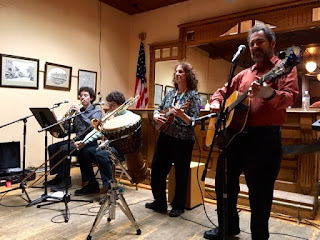 Two Of A Kind is David and Jenny Heitler-Klevans -- joined this time by their sons Ari and Jason (who just finished college).  Best known for their award-winning children's music, they'll present a "grown-up" concert, adding 4-part "family harmony" plus French horn and trombone.  This intimate folk/singer-songwriter concert will include original, traditional and cover songs by the likes of Pete Seeger, Melanie DeMore, Tom Waits, Greg Brown and more, including lots of topical/political material on topics such as climate change, peace and justice, and songs to give you hope in these difficult times. 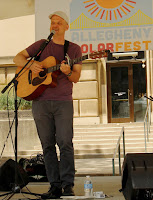 Opening for the Heitler-Klevans clan will be local singer-songwriter Brad Yoder!  We'll enjoy a taste of Brad’s unique mix of humorous, poetic, political, funky and edgy original songs, covering a musical range from folk to indie rock (with unexpected musical and lyrical twists) which has earned him a loyal following ranging from kids to retirees.  And as a special treat, he'll be joining Two of a Kind on the saxophone for a song or two!

Two Of A Kind will also be doing a couple of free interactive kids' shows at libraries in the area that week, a Summer Reading Program performance titled Building a Better World featuring songs about books, reading, and making the world a better place.  Daytime shows in Butler and New Castle (more details below).

House concert at 7 p.m. (doors open at 6:30) at our home in Squirrel Hill.  Light fare to share (contributions welcome but not expected).  Directions and other info will come after you RSVP -- and please do RSVP even if you know your way!  RSVP by email to maren dot cooke at gmail dot com with "concert" in the Subject line, with name(s) of attendees -- and/or via the Eventbrite notice that will appear closer to the date, if you're on the email list for Sustainability Salons (email me with "salon" in the Subject line if you'd like to be added!)  Suggested donation is $15 (goes to the performers;  we won't use Eventbrite tickets but we will be passing the proverbial hat).

Hello friends.
Ringtones are trend for everyone. Ringtones are wary. Ringtones bring joyful melodies. Did your ringtone satisfy? Which phone do you have the best ringtone? I will introduce you to the most popular tunes in 2018, you can refer and leave a review for us.

Here are the top 5 ringtones that are loved by 2018, please install the ringtone by following the instructions below:

I need your comment. Free ringtones fongr people around the world. You can visit my homepage to learn and reference more ringtones: https://ringtonesmobile.net/