The People's Climate March in NYC is over, and it was great!  What's next for Pittsburgh-area climate activists? 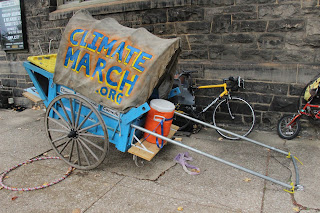 On March 1, 2014, hundreds of everyday Americans set out from Los Angeles, CA, on a 3,000-mile walk to Washington, D.C., with a goal of inspiring others from all walks of life to take action on the climate crisis.  The march has delivered to thousands of Americans the message that urgent action is needed on climate change. Dozens of newspaper and television reports have resulted. Thousands have marched for at least a day, with a core group of 25-35 persons walking the entire distance. Thousands of one-on-one conversations between Americans concerned about our future have taken place. Songs around the campfire and sermons in church sanctuaries and coalition-building gatherings have reverberated across the country.

Take a look at the website to learn more: www.climatemarch.org

The march will enter Pennsylvania on October 10, with stops in Bessemer on Oct 10 at Maggie Henry's farm, Darlington on Oct 11 (with an excursion that day to Butler, PA for a Global Frackdown rally), Freedom on Oct 12, Ben Avon on Oct 13, PITTSBURGH on Oct 14-15, Monroeville on Oct 16, South Greensburg on Oct 17, Ligonier on Oct 18, and five other stops in PA before exiting to Maryland on October 25th.

You may be able to support the march and its purposes, and to make it work for telling our own stories of fighting for a ban on fracking and against mountaintop removal for coal, the Shenango coke plant in Ben Avon, and many other fossil-focused enterprises.  The marchers want nothing more than to be helpful in adding their voices and bodies to the fights we have on our hands.  Can you help organize an event in Pittsburgh on Oct 14th or 15th?  Can you help house marchers, by ones and twos or dozens?  Contact Stephen and/or Wanda.

If you are interested in helping this march amplify its impact as it comes through Pennsylvania, most especially as it stops in Pittsburgh, then contact Stephen Cleghorn (by email or phone) and he will try to connect you with events along the Pennsylvania route.