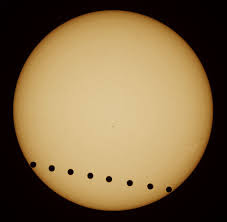 Literally once-in-a-lifetime (if you didn't view the 2004 event), the transit of Venus across the face of the Sun won't happen again until 2127.  You can't view it directly (unless perhaps you aspire to blindness);  you must use either filters (a #14 welder's glass or special solar observation glasses) or projection (the pinhole method that's great for eclipses might not work so well for this, since Venus is so small compared to the sun, but projection with magnification can be rigged using binoculars or telescopes, or with both:  a telescope with a solar filter.  There are many safe community viewings staged around the area including the Carnegie Science Center, Wagman Observatory (in Deer Lakes Park), and the Mount Lebanon public library.  Pittsburgh, however, is slated to be mostly cloudy so you may want to check out some of the many live web feeds of this historic event, such as

...and a fun way to keep in touch with astronomical events the year 'round is to sign up for updates from
http://spaceweather.com/ .

Past transits enabled scientists to establish the scale of the solar system, using parallax as the events were viewed from widely-separated places on earth.  The atmosphere of Venus first became evident during the 1761 transit.  And transit events like this one are one way to detect planets around other stars.

Starting at 6:04 p.m. EDT, and continuing for seven hours (or until sunset, if you're viewing it locally).  Look to the west.