Pittsburgh Green Drinks tries to answer the question What About Marcellus Shale? ...with George Jugovic, Jr., the Regional Director of the Southwest Regional Office of the Department of Environmental Protection. 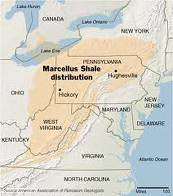 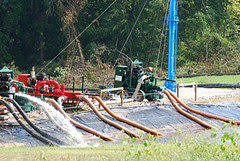 Come join us for a Green Drinks discussion about the opportunities and environmental challenges presented by the Marcallus shale play, with comments by our host, George Jugovic, Jr. Regional Director of the Southwest Region of the Pennsylvania Department of Environmental Protection. DEP's Bureau of Oil and Gas Management regulates the safe exploration, development and recovery of Marcellus Shale Natural gas reservoirs in a manner protective of the commonwealth's natural resources and the environment.

Mr. Jugovic was appointed to Regional Director of the Department of Environmental Protection South-west Regional Office in November 2009. He began his legal career in 1984 with DEP’s Office of Chief Counsel and focused his practice in water and waste litigation. Additionally, he prosecuted environmental crimes cases as a Special Deputy Attorney General with the Office of Attorney General's Environmental Crimes Section For seven years. He left state employment to run the Law Department for the non-profit Citizens for Pennsylvania’s Future where he initiated citizen suits under Federal environmental laws, and represented the organization before the Public Utility Commission.

Mr. Jugovic received his B.S. degree in Environmental Resource Management from the Pennsylvania State University, and J.D. and Certificate in Environment and Natural Resources Law (honors) from Lewis and Clark Law School. He interned with the United States Court of Appeals for the Ninth Circuit. He has taught advanced courses in Wildlife and Environmental Crimes Law at the University of Pittsburgh School of Law. He has written on the constitutionality of Pennsylvania's imposition of strict liability for environmental crimes, and was primarily responsible for drafting the Commonwealth's sentencing guidelines for environmental crimes for the Pennsylvania Crimes Commission.

What is Green Drinks?

Every month, people who work in the environmental field or have in interest in a greener planet meet up for drinks at places all around the world at informal sessions known as Green Drinks. We have a lively mixture of people from Non profit, academia, labor, government, media and business. Come along and you'll be made welcome. Just say, "are you green?" and we will look after you and introduce you to whoever is there. It's a great way of catching up with people you know and also for making new contacts. Everyone invites someone else along, so there's always a different crowd, making Green Drinks an organic, self-organizing network.

These events are simple and unstructured. Make friends, develop new ideas, do deals and forge a new organic future. It's a force for the good and we'd like to help its spreading to other cities. Green Drinks meets on the 3rd Friday of each month from 5:00 - 9:00 PM...or later!! Put it in your calendar and count on it: Green Drinks is happening every month.