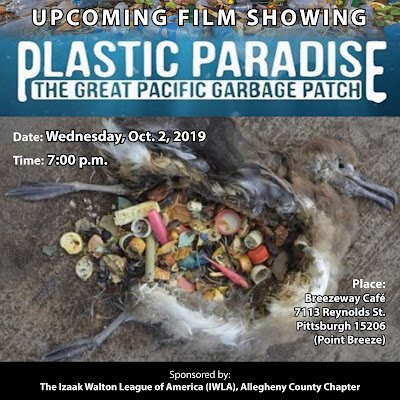 Have you seen the film Plastic Paradise yet?  (everyone should!)  If not, here's one more opportunity:  the Izaak Walton League of America (Allegheny County chapter) is hosting a free screening in Point Breeze.  We featured this amazing documentary at the 60th Sustainability Salon, along with a discussion about the plastics manufacturing hub planned for our region;  it bears watching and re-watching -- and we're now almost three years further along into the petrochemical buildout.

Thousands of miles away from civilization, Midway Atoll is in one of the most remote places on earth. And yet it’s become ground zero for The Great Pacific Garbage Patch, syphoning plastics from three distant continents. In this independent documentary film, journalist/filmmaker Angela Sun travels on a personal journey of discovery to uncover this mysterious phenomenon. Along the way she meets scientists, researchers, influencers, and volunteers who shed light on the effects of our rabid plastic consumption and learns the problem is more insidious than we could have ever imagined.
A brief discussion and presentation will follow the film showing, on how we as individuals, communities, and our local governments can refuse and reduce our single-use plastics footprint.  Please come join the conversation!
7-9 p.m. at Point Breezeway (7113 Reynolds St., 15206)
Our Allegheny County Chapter of the Izaak Walton League of America (IWLA) is in the midst of a campaign to restrict and ban single-use plastics.  Our campaign includes community educational forums, possible legislation and resolutions at the borough, city, county and state levels, as well as the potential for law suits. This whole issue has become particularly acute and will reach crisis levels concerning our health, with the building of a new petrochemical facility 30 miles north of Pittsburgh, and the plans for 4 more such facilities in the region – going exactly in the WRONG direction from where we need to be going on the issue of plastics and recycling.