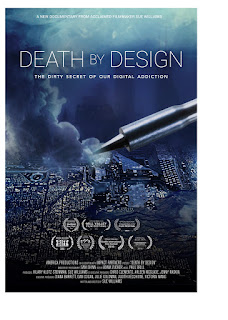 Didn't experience enough scary stuff on Hallowe'en? Extend the holiday with this new film about the electronics industry. Many people love – and live on – their smartphones, tablets and laptops.  I'm posting this MarensList entry from a laptop.  A cascade of new devices pours endlessly into the market, promising even better communication, non-stop entertainment and instant information. The numbers are staggering. By 2020, four billion people will have a personal computer. Five billion will own a mobile phone.
But this revolution has a dark side, hidden from most consumers. In an investigation that spans the globe, filmmaker Sue Williams investigates the underbelly of the electronics industry and reveals how even the smallest devices have deadly environmental and health costs. From the intensely secretive factories in China, to a ravaged New York community and the high tech corridors of Silicon Valley, the film tells a story of environmental degradation, of health tragedies, and the fast approaching tipping point between consumerism and sustainability.

5-7 p.m. (film is about 90 minutes) in Porter Hall 100 at Carnegie Mellon University.  Free and open to the public; no registration is needed but you can respond or discuss on Facebook.


You won’t look at your iPhone in quite the same way again after viewing Sue Williams’ thoughtful documentary -- Moira Macdonald, The Seattle Times

Both jaw-dropping and heartbreaking, Death by Design forces the viewer to reconsider their whole approach to technology -- Hannah Clugston, Aesthetica Magazine

Everyone should see this film -- Sydney Brownstone, The Stranger